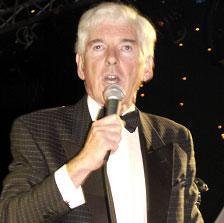 Tom O'Connor surely needs little introduction. He is a household name thanks to hosting TV's Tom O'Connor, Wednesday at Eight, London Night Out, The Tom O'Connor Show and The Tom O'Connor Roadshow. He is also well known for his quiz and game shows; Name That Tune, A Question of Entertainment and Cross Wits among them.

A background as a maths teacher and assistant headmaster in Liverpool has provided Tom with plenty of material for his comedy routines. "Real life can be very funny!" he says knowingly.

Several exhausting years spent teaching by day and entertaining club audiences by night led to a decision point, and in 1974 Tom gave up the day job. Success rapidly followed, and in 1975 he appeared at the Royal Variety Show at the London Palladium.

Tom's success extends to cabaret where he performs throughout the country and in other English speaking countries including America where he appeared at Carnegie Hall in Manhattan.

Renowned for his clean humour and hilarious after dinner speeches Tom is in demand for corporate functions.

Equally in demand is his affable personality and ability to enjoy company from all walks of life.

A keen golfer, Tom has published several humorous golf books, including From the Wood to the Tees, and Follow Me, I'm Right Behind You. He lives in Berkshire with Pat and their four children.

The Charity is grateful to Tom for giving up so much of his time to both receiving and handing out cheques on our behalf. We are delighted to have his support.